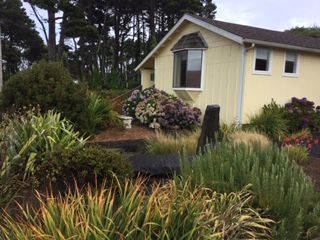 History of the Club

Founded in 1948, Seal Rock Garden Club is a 70 year plus community non-profit organization formed for coastal gardeners to share their knowledge of plants and to provide a social setting for individuals interested in gardening,  conservation and support of community gardening projects.  A housing barracks for conscientious objectors during World War II, the clubhouse originally located at Camp Angell, Waldport was purchased at auction for $306 and was moved to its' present site in Seal Rock in the 70's.

Monthly meetings are held every 3rd Wednesday of the month, from September to June with presentations on gardening topics relevant to coastal gardening.  Meetings begin at 11:00am, with monthly presenter, followed by general meeting and lunch provided by members.

We meet when the weather starts to turn cool and rainy, allowing us maximum time in the garden during the warmer, drier summer growing months.  Field trips to private and public gardens are available to members as well as visitors throughout the course of our "club season". Experts from Oregon State University, private enterprise, University of Oregon and others in their field of expertise present informative lectures and demonstrations on horticulture, flower arrangement and master gardening.  Presentations begin at 11:00 a.m. followed by a business meeting and a light lunch.  Our meetings are free and open to the public.  The club is a non-profit organization, 501 (c) (4).

Each year members are involved in two major fund raising events, the Greens Sale in December and the Flower and Plant Show in June.

**Update** Our sale on Saturday Dec7, 2019 featured so many lovely wreaths and tabletop decorations, the show was very well attended by our lovely community.. Locally grown greens are crafted and designed  into wreaths, swags, and table arrangements made by members.  Holiday gifts, small live decorated trees and a raffle of gift items are available for purchase.  Funds from the Greens Sale are used for maintaining the clubhouse and grounds.

The Flower and Plant Sale in mid-June is an end of the year event with the clubhouse decorated with spring flowers and the surrounding yard full of sale plants suitable for coastal gardens.  Mark your calendars for our Plant Sale.  Gardeners start lining up early to buy plants.  Sales are brisk.  A portion of the funds raised go to nonprofit organizations that support gardening, education, conservation and local civic gardening projects.

Medicinal Use of Cannabis by Rhea Graha

NEXT CLUB MEETING WILL BE HELD ON WEDNESDAY January 15, 2020

Rhea is well known and respected in the Cannabis circuit of Oregon and the United States. She was instrumental in Medical Marijuana businesses being allowed in Albany, and she helped them get their doors open as well.

Educating people to the many medical uses of Cannabis and industrial uses of Hemp is important to Rhea, and something she greatly enjoys. She has been asked to present information to a number of groups including the Albany Optimists, Linn-Benton Oregon Retired Educators Association, Logsden Community Club, Albany Low-Vision Group, Lebanon Parkinson’s Group, and more. Rhea’s written work has been included in publications such as Pineapple Magazine, The American Cannabis News, and the monthly High Points Good News for the Willamette Valley.

Thought for The Month

by Betty Bahn and Sally Noack

"Growin Coastal" is the work of members Betty Bahn and Sally Noack.  This garden-wise contribution is culled from their many years of coastal gardening experience, research and education.  Their presentations, "Horticultural Table Notes", at our monthly meetings guide members on practical, timely how-to measures on what to do in the garden, information on garden events, and in-depth answers to questions and whatever and anything anyone wants to talk about.  "Growin' Coastal" aims to continue to offer their guidance here in written form.  In this issue, we offer Sally's contribution to "Growin' Coastal"  as Betty's appeared in an earlier posting.

RECIPES FROM THE CLUBHOUSE

Our members take turns each month in generously providing delicious  luncheons and sharing their favorite recipes with us. There are many recipes to test and enjoy here, but unfortunately we have room for only a few.   Each month we will feature one or two dishes that are sure to become your favorites.

A wonderful recipe submitted by our member Carrie Davis:

For the meat filling:

activities of interest to gardeners in our community .

No postings at this time!

Disclaimer:  The views and opinions expressed are those of the authors and do not reflect the official policy or position of the Seal Rock Garden Club.  Any content provided by our authors are their opinion and are not intended to malign any religion, ethnic group, club, organization, company, individual, or anyone or anything.